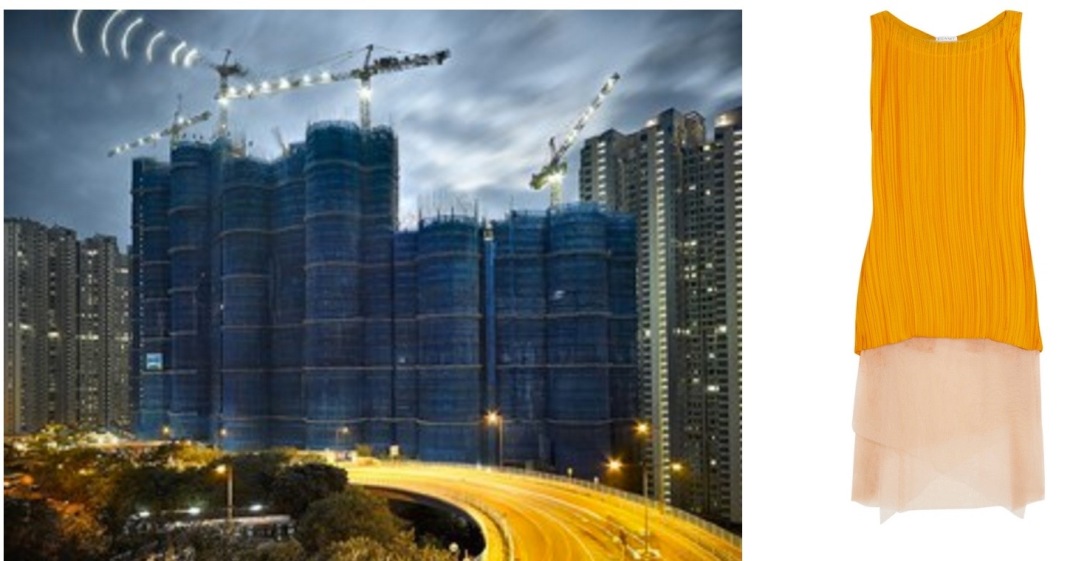 A building sheathed in fabric conjures a Christo and Jeanne Claude creation. So thought photographer Peter Steinhauer when he deplaned in Hong Kong and spotted a skyscraper draped in yellow scrim. And then another, a column of green, and another, beige. “I kept thinking about the metamorphosis,” Steinhauer said in a post on the New York Times’ Lens blog. “I thought caterpillars to butterflies and then my wife said, ‘cocoon.’ It just stuck.”

Stuck as a passion project. Steinhauer has spent the past decade documenting this peninsular phenomenon: in Hong Kong, when buildings are being built, renovated or demolished, crews construct bamboo cages and strung with silken nets to catch debris and dust. Scaffolding, gone beautiful. Steinhauer’s daily routine finds him up early driving around the city, scouting for new shades. The canary color of his first sighting has proved to be a rare specimen; green and beige are most popular. Often his frames are found by mild subterfuge – a fake cell phone conversation or mountainside vantage point. Nighttime lends a sci-fi filter to his photos, an eerie glow cast by the sodium vapor lights attached to cranes.

Invariably, residents looked on his creative focus with disdain. But only when his apartment complex was poised to be shrouded during renovation did his veil of wonder lift: he shuddered at the prospect of spending nine months looking out at a green world. His personal inversion, from exterior appreciation to interior aversion, makes his photographs all the more nuanced: How many lives are caged in by colors?