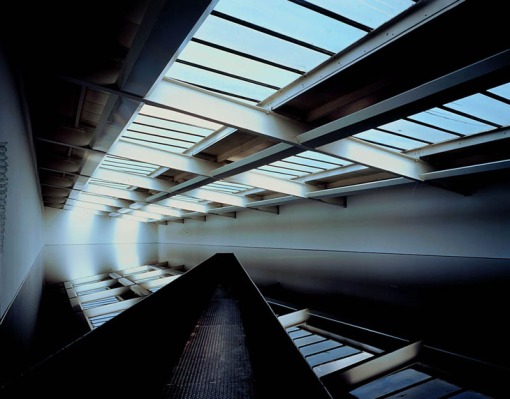 20:50 by Richard Wilson at the Saatchi Gallery in London.

Richard Wilson has built his career on masterful mischief and impossible installations: he carved a circle from a concrete building, tilting it open like a window; he scrunched the corner of the London School of Economics into a stone tumble; he sliced a ship in half, anchoring it outside the Millennium Dome; and he balanced a bus on the edge of a Sussex pavilion. In spite of his surreal skill, his latest work seems to lack the awe-inspiring alchemy of his previous projects, perhaps making up for it in might: Slipstream is a jumbo-jet-sized sculpture barreling through the new Terminal 2 at London Heathrow Airport. Following the spiraling course of a stunt plane, the piece makes tangible the velocity and acceleration of flight (twists and tumbles initially traced in a vat of margarine).

With the June opening of Terminal 2, Slipstream is featured widely right now, so instead let’s look back at the work that catapulted Wilson’s career. In the late 80s, he filled an East London gallery with sump oil, drawing visitors to explore the inky abyss. Hailed as a pioneering piece of site-specific installation art, 20:50 was bought by Charles Saatchi, who restaged it around the world before building it a custom home in his London gallery. An entrance platform offers an initial impression of a holographic field, a polished floor, an infinity pool. A sunken gangplank invites closer examination: waist-deep in the obsidian lake, visitors find themselves surrounded by a virtual expanse that simultaneously absorbs and mirrors the space, a phantasmagoria at once mesmerizing and confounding. Gently blow the surface and send pitch ripples radiating.

After arriving in London under serpentine Slipstream, I will beeline for 20:50, carried on by Vic Matie’s flashy flats, a stylish synthesis of these two installations.